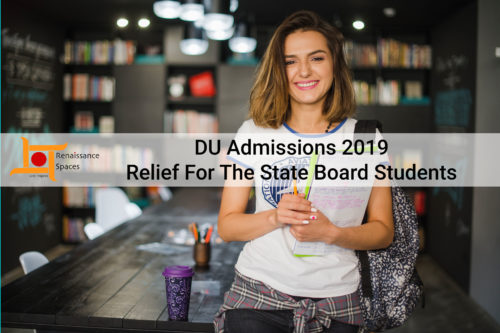 DU Admissions 2019 : Relief For The State Board Students

Students of the State Board will be in the benefit of this time in Delhi University. The university is also going to include those subjects in the list of Academic Subjects, which are read as an academic subject in the State Board. So far there are two lists of subjects to calculate Best Four Score in the DU. The first list contained analytical subjects and in the second list, non-acronym courses such as Vocational Subject Now the DU will have 3 list of subjects. The first – analytical, second- non-academic and third-class academic subject of the board. They were not considered an acronym yet, and adding to the Best Four was cut off by a few percent of the score. The online admission process in DU will start around May 20.

Apart from the CBSE, there are 34 boards, where the students take admission in Delhi University. DU officials say that now these students will not have the fear of cutting the marks after taking the state’s acronym. Dr. Rasal Singh, member of the Standing Committee of the DU, says that till now many such subjects were considered non-acronym and if the students took them, their numbers would have been cut. Indeed, DU prepares a cutoff list based on the score of Best Four for admission in undergraduate programs. For example- Biochemistry is taught in Jammu and Kashmir, which is put in the list of DU non acronym subject. This time, when Syllabus of Biochemistry was studied, it came to know that it is just like CBSE’s biology, just names are different. For this reason, list C was created. Similar to biochemistry, some other subjects, including Logic and Philosophy, Mathematics A and Mathematics B (Andhra Board), will also be included in this category. Non-academic subjects have physical education, painting, typography, cooking etc. This step will benefit students of the State Board.