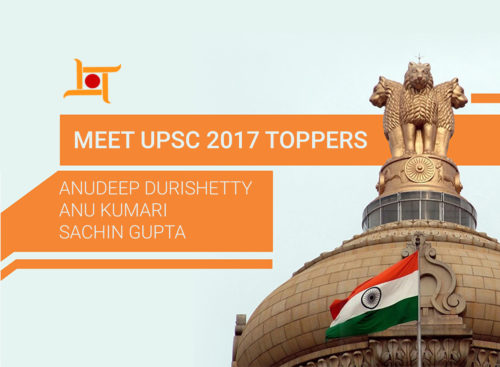 The final result of the country’s most prestigious and difficult Civil Services Examination, 2017 (UPSC) has been announced. As per the results declared Friday late evening, Anandeep Durishhetti, who lives in Hyderabad, has topped the list. On the other hand, Anu Kumari of Haryana is second and third, Sirsa’s Sachin Gupta. Let’s tell you about these 3 toppers journey to achieve their dreams.

Topper Anudeep Durishetty had been successful in this examination even earlier and was currently working in the Indian Revenue Service in Hyderabad. Graduate from Bits Pilani has worked in Google too. Anudeep Durishetty had examined the subject of anthropology. After the results, he told the media that he was very happy with this success and thanked all those who supported him on this journey.

Anu Kumari, who is coming second, is from Sonipat in Haryana. After doing BSC in Physics from Delhi University, he studied MBA from IMT Nagpur. Originally this was the second attempt of Anu Kumari, daughter of Baljit Singh, a resident of Divana, a village of Panipat. Anu told that he had been doing a private job for the past 9 years, during which he got married. To prepare UPSC, Anu had sent his son away from himself to his parents for one and a half years.

Sachin Gupta, who got third place, is also from Haryana. He has studied mechanical engineering from the Thapar University of Patiala. After completing the engineering, he also took a job in a private company in Gururgram but he wanted to join the civil service. He decided to leave the job and prepare for the UPSC and now the result is in front of everyone.